Following the same structure of CPU, i will be covering what the Graphic Processor Unit (GPU for short) does, as well as the topics such as types, speed cache and address/data bus. I will also be covering other aspects including 2D and 3D processors. All of which is below.
Types:
Ok so first off, what is a GPU?  Well firstly, i must explain what a graphics card is. A graphics card, as detailed in the closest image, is a lot like a motherboard.. It is a piece of circuit board that slots within the computer. This card holds a processor and RAM, as well as an input and output system chip which stores the cards settings and preforms diagnostics on the memory, input and output at start up. The processing within this card is where the GPU comes in, as it a main component to making the graphics card work. 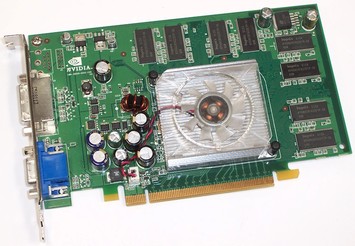 A GPU is very similar to CPU, however its main purpose isn't to carry out commands, it is to specifically focus on the processing of complex mathematical and geometric calculations which are necessary to render graphics. But what kind of graphics? Every graphic which is seen on the computer screen. Once again, like the CPU, a fan is required to keep the processor cooled, as the calculations can often overwork the card and result in over heating. The GPU's main purpose is to process and therefore create images, in order to do this it needs somewhere to hold the information and completed pictures. This is where the card's RAM comes in. I will be covering RAM in the next page, The reason a separate component from the CPU is needed is because the mathematical equations the GPU must process would be much too strenuous on the CPU, and so a dedicated card is needed to keep things running smoothly, as it frees up cycles making it run faster overall.
There are many types of Graphic Cards available, and when looking at the gaming side of computing, you will find that in order to experience gaming at its highest resolution and graphics, gamers have been known to spend thousands on high end Graphic Cards. This is because a main aspect to gaming is the graphics, both for the payer and for the computer. As such there are also a varied amount of GPU to go with the card, although the graphics chip will usually be made by iether ATI, or NVidia. However before looking at the individual specs of a graphics card, there are also a couple of different types which vary greater than the processing power.
Speed:
Because of its similarities to the CPU, the speed of the GPU is also measured using the same clock speed type of measurement, and by using MHz as well. Once again, the higher the clock speed, the more efficient it is, and the more beneficial it becomes to doing complicated calculations. For example, the clock speed of a laptops GPU is often lower than that of a computer, because there is less power within it due to its ergonomic design. Because of this, the laptop's lower GPU clock speed may result in a game lagging, because the processing power is slower or delayed, whereas the computer with a larger Cache and better processing speed/ clock speed may play the game a lot better, resulting in no lag and an increase in visuals, because the GPU has enough spare processing to start the next calculations need, making it more smooth and efficient.
Two- Dimensional and Three- Dimensional Processor:
Within a GPU there can be found 2D and 3D processors. These processors do exactly what the name suggests, as they process all the information they are given into calculations so that they may appear on screen for us to see. The rendering of a graphic comes at the very end of a pipeline, and and what appears on screen is all dependent on this stage. The rendering engine can consist of a dedicated hardware or software program, which generates a digital image in a "Frame buffer". Rendering is needed for both 2D and 3D graphics, however 3D rendering takes a lot more processing power. This is because the calculations needed to work out how and objects polygons will be displayed is a lot more strenuous on the computing than it is for calculating pixels for a 2D image. Its because of this that if you were to want to play many modern games on the PC, which mainly consists of 3D models and graphics, a dedicated GPU will be needed to run it smoothly. This is also why people will spend more money on getting a better GPU than CPU, but ideally want a well balanced computer.
Next Page: Memory