On this page, i will be covering everything under Game Storage Medium. What this includes is topics such as universal media, magnetic tape, speed, size, and other subjects related to them.  I don't know why i am still doing introductions considering its pretty the much the same gist each time, but still.
Flash memory is most commonly found within a Universal Serial Bus, or USB, and because of the many uses it poses within the gaming genre, newer consoles such as the Xbox and PlayStation have incorporated a USB port within their design, allowing easy data transfer, as well as providing extra save space for the game data. Because USB such as the Kingston Datatraveler 310can carry up to 256 GB, this proves to be a very useful option for people who have too much data for any one hard drive. However if it were to be used for gaming exclusively, it would probably be more beneficial to buy an extra hard drive, as it would be cheaper. But if it is need for more than one device, to transfer data from one thing to another, a USB is a better alternative because of the advantages listed above.

Advantages and Disadvantages:
I have highlighted  most of the advantages and disadvantages of game storage media above, however i will compile it here for better understanding.
The optical disk format has many advantages over the magnetic tape format, as it is a lot more up to date and modern. These include the fact that they are damaged less easily. This is because although they are thinner, and can snap when some pressure is applied, the technology itself is a lot more sturdy and reliable, the fact that the data relies on a solid piece of plastic as apposed to flimsy magnetic wire backs this point up. In addition to this, because the  DVD format relies on laser technology as apposed to magnetic tape, there is less chance of corruption due to power surges and and magnetic disturbances.
The main advantage which tapes have over DVDs though are the fact that they are very simplistic. You simply put the tape into a tape deck and it plays. This requires less dependency on technology unlike DVDs, which can often freeze, lag, or have long loading times. They are also covered in a protective shell, guarding the tape within unlike DVDs which can be scratched easily and require a case to store in.
The biggest advantage that one has over the other in this case however, is that Optical discs can actually play video games. Not only that but there are many different variations and adaptions between discs which allow them to specifically be tailored to different genres, whereas VHS tapes are only really useful for playing videos on one device, a tape player, so it cannot be used across platforms like a disc which can play in a DVD player, CD player, or computer all with the same disc.
Antipiracy:
Illegal copying of DVDs and more relatively video games has been an issue since the beginnings of game storage mediums. This is because of how easy it is to simply cop the information within a storage device like a disk or installed files. Some of the most pirated video games are those of cartridges, simply because its so simple and easy to do. As the video game industry has evolved, so has the counter measures to piracy. Newer gaming consoles are beginning to come with chips installed within them that aid in preventing copied games to play at all, This is done by recognizing the file formats and files within the data. Copied games often have t use some variation of the game, not an exact replica. This is recognized by the system and prevents the game from playing.
There are more creative counter measures though. Some games allow them to played, but include piracy warnings or missing data. A notable example of this is Spyro: Year of the dragon. after getting to a certain point within the game, a character will tell the game is a copy, begin removing collectibles from the game, along with the ability to save, and makes the game unbeatable. 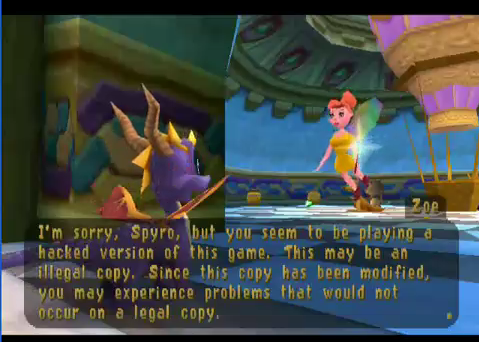