Also referred to as CPU, within this page i will be covering the explanation of what this is, the types available, and other topics related to it, which are once again highlighted below.
Types:
Before i go into what types of CPU are available, it would be useful to know what they actually are and do.  Well a CPU is commonly referred to as the "Brain" of  a computer, this is due to the importance it has to allow a computer to work, and the similarities between its functions and that of a brain. By this, i mean that a CPU's job is to handle all the instructions it receives from other components within a computer, including the software and hardware that is running on the computer. This is achieved by the primary component within a CPU, which are the ALU and the CU.
ALU stands for Arithmetic Logic Unit, and is considered an integrated circuit within the CPU. the ALU is there to preform arithmetic and logic operations, which is the addition, subtraction, and shifting operations, as well as Boolean comparisons. What this means is that the ALU is designed to preform mathematical calculations for the CPU, which then allows the CPU to execute commands in a language the computer can understand.
The CU, or Control Unit, within the CPU has three main jobs. Firstly, it controls and monitors the hardware which is attached to the system, in order to ensure the commands given to it are used. A simple way to understand this is that for example, if you send something to print, it is the CU's job to keep check that the instructions are sent to the printer correctly. The second job it has is that it controls the input and output of data so that the signals go to the right place and at the right time. Finally, the last main job it has is that it must control the flow of data within the CPU. By maintaining all these jobs, it allows the CPU to work properly and efficiently.
And so together, with the CU directing all of the processing operations, and the ALU preforming all of the mathematics equations in order to get the operations done, the CPU is able to act as the central processing unit, and can handle all of the instructions a computer is asked of.  Physically, the CPU is a small chip which is found on the motherboard of a computer in a slot, and due to the amount of processing it may need to do, it can become very hot, and so it needs its own cooling fan in order to keep it functioning smoothly.  As seen by the picture below, (highlighted by the red rectangle) this is what many CPU look like. 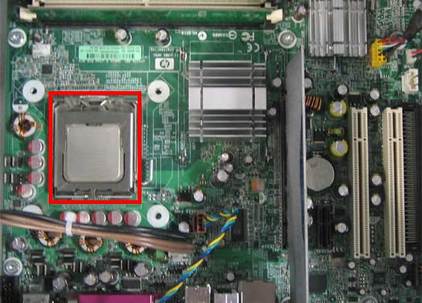 But as there are many different types of computers, there are also many different types of CPU, some of which i will be talking about now. For starters, there are two leading CPU manufacturers, one being Intel, and the other AMD, each of them have their own types of CPU's. However the main differences between CPU are the amount of core it has.  There are three main CPU's which are popular, these are Single Core, Dual Core, and Quad Core.

Speed:
As mentioned above, the speed of a CPU can greatly depend on how many cores it contains, but in addition to this, there is a more technical understanding as to how fast a CPU is working at. For starters, the speed of a CPU is determined by how fast the processor is working, AKA the amount of cycles the CPU can preform within a second. This is also known as Hertz, and his how speed is measured. So an example of this would be that one Hertz means one cycle is completed within a second. In addition to this, if one million cycles are completed within a second, this is called a Megahertz, and finally, the most common form of processor speed is the Gigahertz, which means a total of a billion cycles is completed within the second.
Despite this however, it does not mean that a 2 GHz CPU is twice as fast as a 1 GHz CPU, as the efficiency of the CPU must also be taken into consideration, and efficiency can vary based on the CPU's architecture. This is where clock speed comes into play. Clock speed is what measuring the speed that the microprocessors executes each instruction is called, and the the faster the clock rate, the faster the CPU is.
Cache:
An important part to any CPU is the Cache. The cache was first invented to solve a problem which older computers suffered with, and this was the fact that the memory of computers were very limited. What this meant was that the functions of a computer was very slow. Caching helped solve this issue. CPU caches are small "Pools" of memory that store information to the CPU, more specifically information which the CPU will most likely need. The whole idea behind this into ensure that the CPU has the data it needs when it needs it, so it will not need to go searching around for the data . This makes the process a whole lot quicker, as its like a human putting a bookmark within a book, making it faster for us to find a page instead of searching through the whole book page by page.
Because adding a cache to a CPU is less cost effective to manufacturers, it means that the low budget CPU's may have a small, or non existent cache. This is often why gaming specific computers come at a high price, as having a top notch CPU, with a large Cache and a lot of GHz is important for a computer to be able to run games well and efficiently.
There are two terms which important when looking at cache, which are cache hit, or cache miss. This simply means that the CPU will always look at the cache for the data it needs before looking anywhere else. If the data that is needed is within the cache, then it is a cache hit, whereas if the information that is needed is not there, and the CPU must check the main memory, then it is a cache miss. The percentage of hits to misses is called the hit rate, and the higher the hit rate, the better performance. 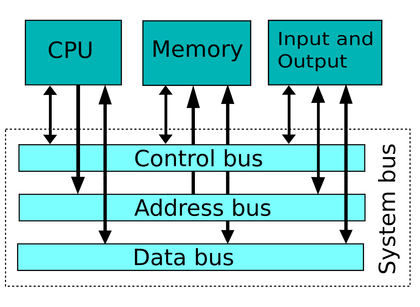 Address/ data bus:
The final component of CPU which i will be covering is what is known as Address/ data bus, The first bus i will cover is the address bus. Within each computer, a system bus is present. This is what connects the major components of a computer system together, and has three main elements. The address bus is one of these, along with the control bus and data bus. The address bus is used to transfer data between devices that are identified by the hardware address of a physical memory, which takes the form of binary numbers in order to allow the data bus to access memory storage. The CPU uses this address bus to locate physical address to communicate commands. The address bus is measured by the amount of memory a system can retrieve, and systems with 32-bit address bus can address 4 gigabytes of memory space, whereas newer computers using 64-bit address bus can address 16 exabytes of memory locations, making it a lot more efficient. This is why focus on bit is very important in upgrading a computers speed.
The data bus has a similar function, as it is also their to transfer data, only this time it is within the microprocessor and memory devices. A typical data bus is 32 bits wide, which means that up to 32 bits of data can travel through a data bus every second. Just like address buses, 62-bit paths are becoming more popular, and greatly increase the speed of which the CPU functions. As you can see from the diagram above, the data and address buses travel to different aspects of the CPU, And the data bus is there to split up the the CPU and memory from peripheral devices, this allows the CPU speed to increase without needing the same increase in peripheral speeds. What this means in simple terms is that it allowed the data transfer to  be quicker, as a pathway between expansion cards going directly to each other is available.
Next Page: GP